Hi everyone! It has definitely been a while. Since the last update (over a year ago!) after recovering from his amputation, Cheddar underwent a course of carboplatin chemotherapy (5 doses, each spaced 3 weeks apart), and has been having regular checkups with his oncologist every 3 months since last September (when he finished with the chemo).

We had a great year and made lots of happy memories with Cheddar! Compared to before, he seemed more energetic and wanted to run around more with other dogs at the dog park and with us!

He still was not too sure about stairs, but we worked on them so that he at least wouldn’t be stopped by small sets of stairs on walks and he made great progress.

He became ‘Uncle Cheddar’ to Teddy, a new puppy living upstairs from us. 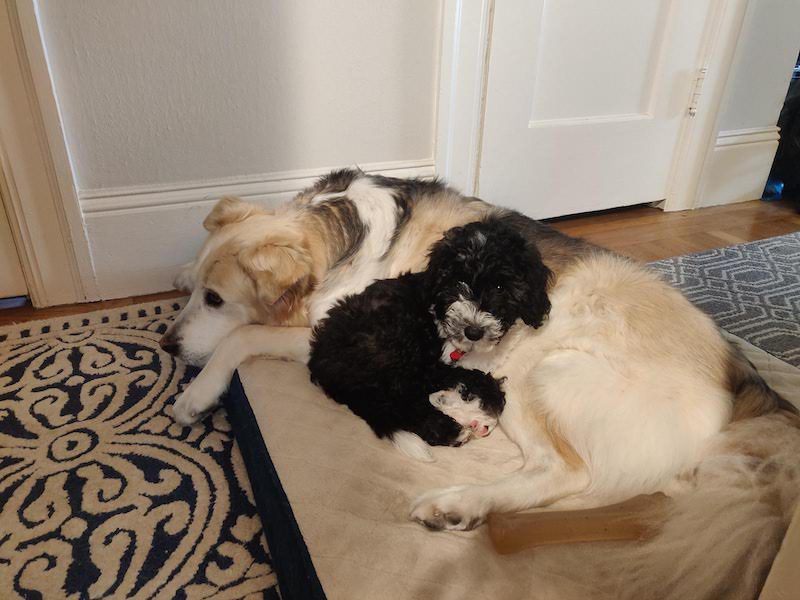 He spent Christmas and Thanksgiving with the family and got so anxious/excited  that he peed in the kitchen. He is as hungry as ever and got very good at catching snacks that are thrown at him. Here he is trying to steal some appetizers without anyone noticing — a difficult feat for a tripawd indeed. 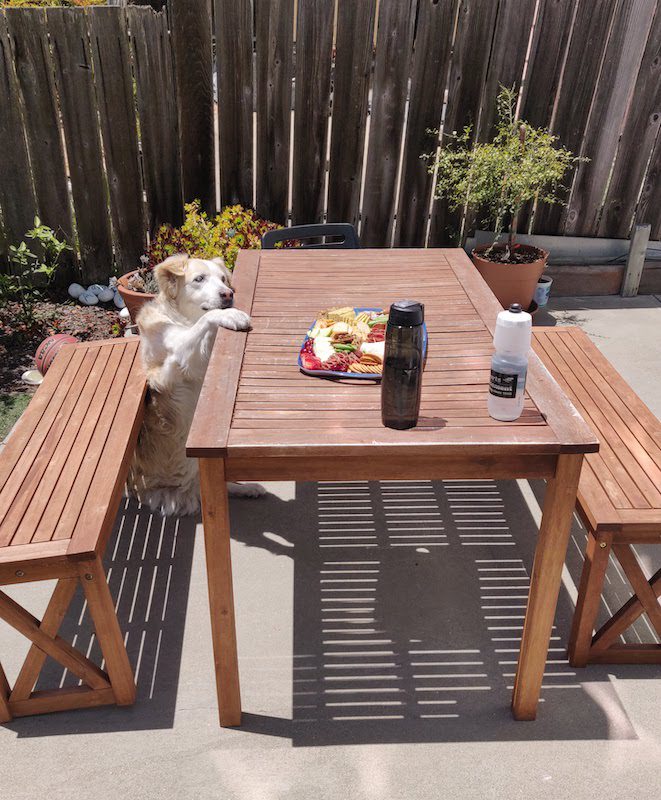 We took him on some road trips and he got to go to the beach and watch some July 4th fireworks (they don’t bother him because he’s deaf!) 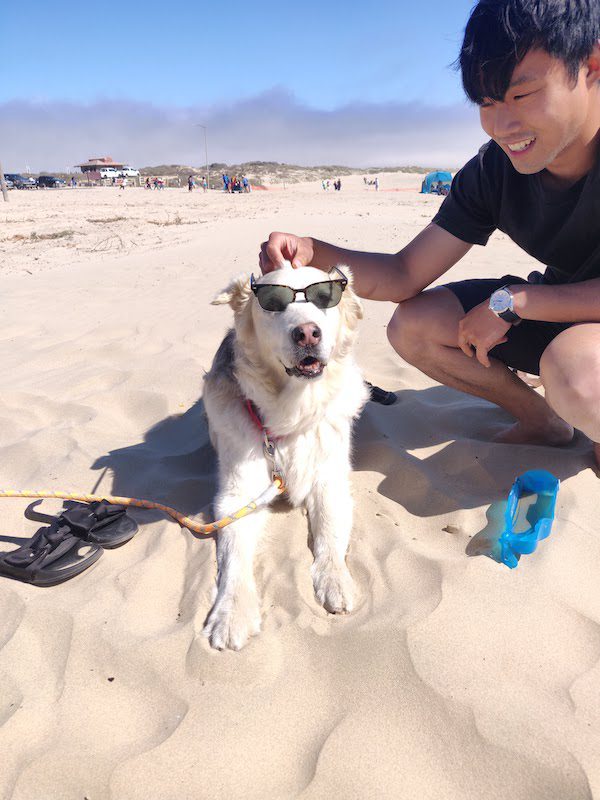 We are very thankful that we got to spend so much good time with Cheddar where he could be a regular dog! Unfortunately, with age, everyone eventually slows down, and in September of this year, Cheddar was afflicted by a bad bout of vestibular disease, or old dog’s vestibular disorder.

Vestibular disease affects a dog’s inner sense of balance, causing them to feel nauseated, and it’s really hard for them to stand up or walk straight. The day it happened, Cheddar suddenly threw up his breakfast and was thrashing around erratically — his eyes were also rolling around A LOT (a symptom we later learned is called “nystagmus”), and it was really scary to see him. We thought he might be having a stroke! We took him to the emergency vet where he was diagnosed with vestibular disease and were sent home with some nausea meds.

The next few weeks would be the hardest time we’ve had to go through with Cheddar — his recovery is still not 100% complete even today, even though most dogs reportedly recover within 2-3 weeks. Also, as a tripawd on the larger side, it’s even harder for him to regain balance since he’s already a little tipsy to begin with! He couldn’t even stand up for 2 weeks — this made managing his pee and poop cycle very difficult, and there was a looot of laundry being done every day (thankfully Teddy had some leftover pee pads from potty training that we put to good use)!

Slowly though, we worked on getting him back on his feet (with assistance) and started going outside again (which I think he appreciated, it might be boring sniffing the same old stuff in our backyard). He also still has a head tilt to the right, which is kind of endearing but also means his sense of which way is ‘down’ is still altered! 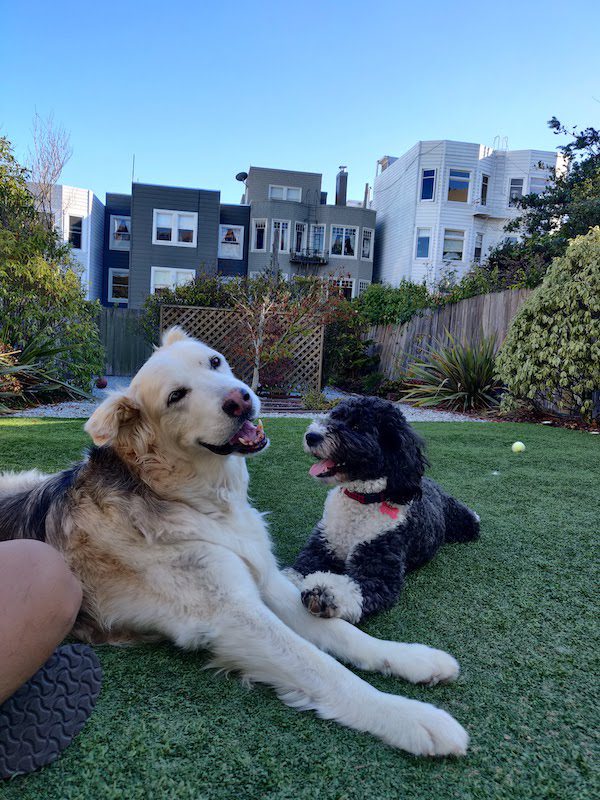 We tried things to help him get back to walking on his own, like a rear leg harness (we found them kind of hard to use since they are usually designed for 4 legged dogs, and he kept kind of falling out of them due to a missing contact point), his post-amputation sling (it pulls a little too much on his underside, which causes his rear leg to stiffen up and not be as limber as it should be for regular walking). The thing we found works the best for now is one of us holding his right hip (basically being a 4th leg / stable point for him to lean on) as he hops along, but he still gets tired pretty quickly. At this point, about 2 months after the start of his vestibular disorder, his progress has stalled a bit and he has good and bad days in terms of leg strength when we take him out. Pretty sure we are now known as the family that carries the big 3 legged dog around the neighborhood. He’s still pretty eager to get around and smell and pee on all the things, so we invested in a little wagon to help him get around (and to save our backs from carrying him so much!). 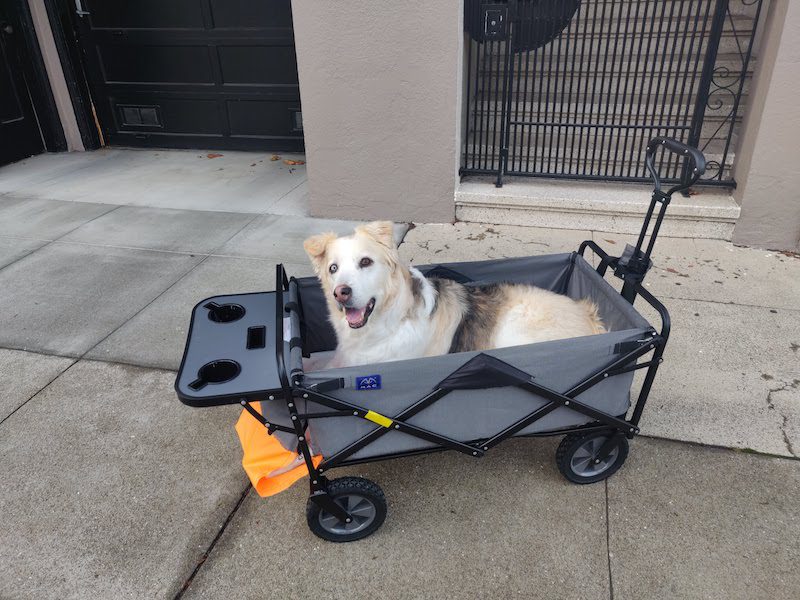 In other bad news — at the beginning of October, we also went in for a regular oncologist checkup and came out with xrays showing that Cheddar’s osteosarcoma has returned in his right shoulder 🙁 There’s not much medically we can do about it since he’s already a tripawd, so we’re just making sure he’s as happy as can be for however long he has left. We’re both obviously extremely sad (cancer sucks!!!!!), but still very grateful for the fact that he has outlived the average for an OSA dog with amputation + chemo. We definitely made (and are still making!) a lot of fun memories.

Anyway, just wanted to throw up an update on Tripawds community because it’s always been so supportive of us and Cheddar, and maybe our experience with a tripawd with vestibular disease can help someone else out down the line too. Hoping to share some more updates when we have the time and energy again!

To conclude, here’s Cheddar doing a good sit + shake and catching a treat as a reward. Until next time!

One thought on “A mixed bag of updates: A tripawd with vestibular disease”