Today we’d like to talk more about the brief time we had Cheddar before his amputation, and to share our experience learning about his cancer diagnosis and evaluating care options leading up to his amputation.

A little about us before we begin Cheddar’s tale: we are Winnie and Alex, a couple in our 20s living in San Francisco. We adopted Cheddar at the end of April 2020 since we thought that having the shelter in place order would mean we would have more time at home to take care of a pet. Little did we know, we were in for wayyy more than we bargained for!

We know it might be gross, but we believe that it will be more helpful for people to see what we saw and compare any similar things they’re seeing if they can see the full extent of what happened in our journey, so we’ve decided to not hold back on the pictures.

The reason we brought Cheddar to our local vet the first time was that he had a limp while he was walking and was finding it difficult to get up the stairs to get into our house. We wanted to know if there was anything we could do to make things easier for him. Here’s an example of him limping:

Our local vet inspected him and said that we would probably need to get x-rays done to really determine what was wrong. She also suggested that if surgery might be an option, we should get those x-rays done at the orthopedic specialist so that we wouldn’t need to double up (since specialists can be very particular about using their own x-rays rather than those taken from a regular vet clinic).  Actually at this time, the vet suggested that the issue might be hip dysplasia, and cancer was not a realistic thought because of Cheddar’s supposed age of 3 (this number was given to us by the rescue we adopted him from, but as would become clear, Cheddar is definitely much older than 3). Taking our local vet’s advice, we got in touch with an orthopedic specialist in our area and took Cheddar in for an initial consult.

The first thing the orthopedic specialist did was inspect him externally and stretch his legs out in different positions. I’ve never heard him yowl so loudly as when they moved out his legs! He must have been in terrible pain. The vet also was concerned by his right ankle joint, which was enlarged. She suggested x-raying that joint in addition to the hips (given that we were there for supposed hip dysplasia). She said that there might be additional actions to take depending on the result of those xrays, so we ended up letting them take Cheddar for the whole day. We knew things were not good when they called back in the midday and said that they would need to run a few additional tests — the xray for the ankle joint had come back looking extremely concerning, and they had performed a fine needle aspiration in the joint to extract some of the joint fluid out, and it had come out bloody and dark (definitely not normal — it should have been clear).  At the end of the day, we were shown the x-rays. 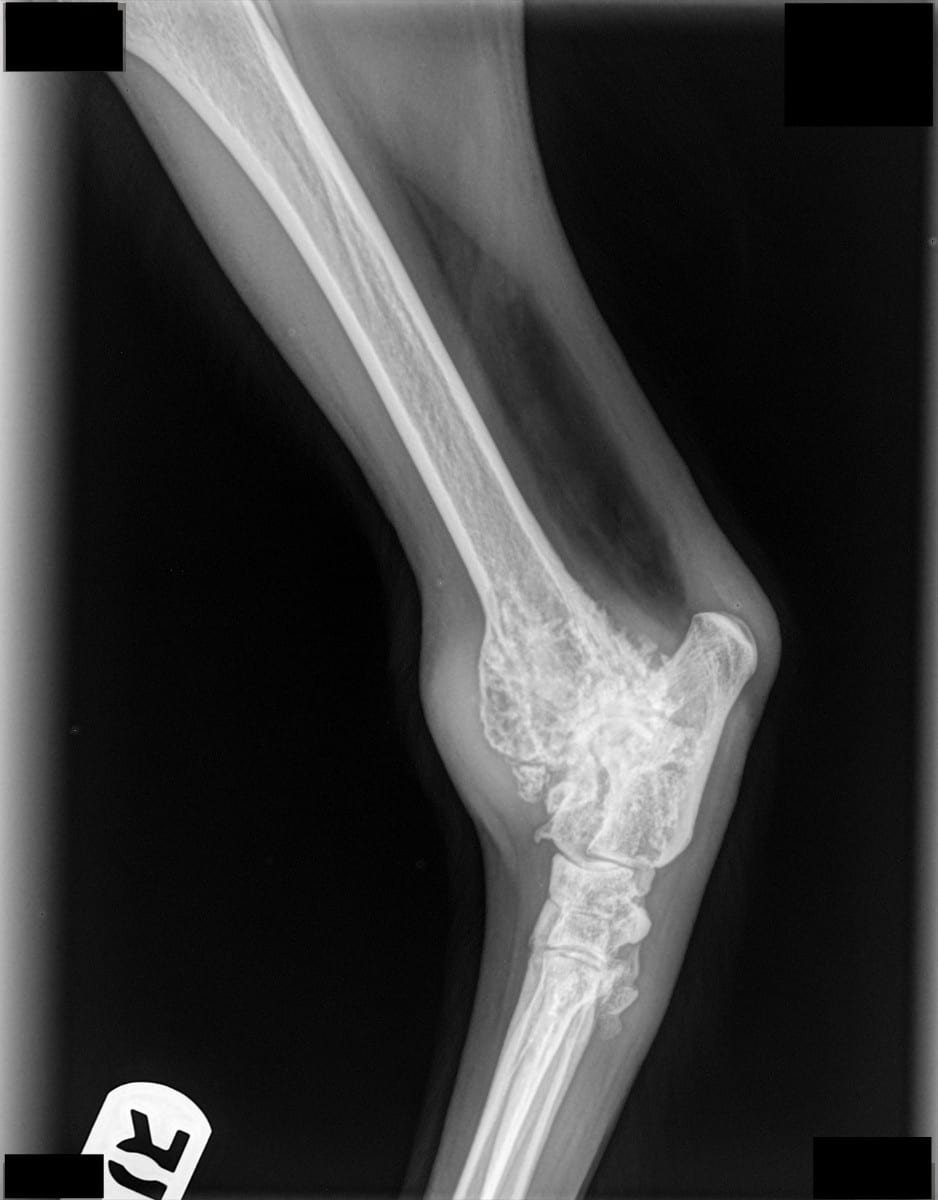 This was the primary tumor in his right rear ankle joint. As you can see, there is a ‘cloudiness’ across several bones and jagged edges along the bone. The periosteum (surface of the bone) has almost completely disappeared in some parts. It definitely was not normal, and was highly indicative of cancer. The fine needle aspiration sample came back negative for infection-related bacteria as well.

We also found evidence of Cheddar’s real age from his hip x-rays (his hips looked great, by the way) — the spine showed some compression and spondylosis in the lower vertebrae (age-related wear on bones) which indicated that he was definitely much older than 3, making cancer a more plausible diagnosis.

Furthermore, we were given the impression that our choices were somewhat limited — the orthopedic surgeon was hesitant to perform an amputation due to the arthritis in Cheddar’s spine, and was concerned that he wouldn’t be able to get around well on just 3 legs because he had yelped in pain when she was inspecting his spine.

Deciding what to do

We came home and mulled over our choices for a couple of days. We should say at this point that it had been about a week or two since we adopted Cheddar, and also that Cheddar is actually our first dog — we felt completely overwhelmed and weren’t sure at all if we could really take care of him well. There were a lot of tears and a lot of stress. We had to discuss whether we would give him back to the shelter — we really didn’t want to, given what we had learned. We weren’t sure about his chances of getting adopted again, or what kind of treatment the rescue could afford (it was likely that he would simply be put on palliative/hospice care). Also, none of this was Cheddar’s fault — he is truly a really good dog with a great personality and really no behavioral issues; he had just drawn an unlucky lot with his health conditions 🙁

We opted to follow up by getting more information about the cancer. From the fine needle aspiration, we weren’t able to tell what kind of cancer it actually was. In fact, the radiologist looking at the x-rays had suggested that it was unlikely to be osteosarcoma given that multiple bones in the joint were affected. So, our first course of measure was an incisional biopsy — the orthopedic specialist would cut open the joint and remove a sample of cells to be sent and inspected in a lab. As part of this procedure, Cheddar would also get a set of chest x-rays done to see if the cancer had already metastasized to his lungs or not — if it had, it might not make sense to do the biopsy at all, since it would suggest that the cancer had progressed very far already. Luckily, the x-rays came back clear and the biopsy was done.

A couple of days later, the diagnosis came back from the biopsy — Cheddar was confirmed to have osteosarcoma 🙁 We knew that this was a very aggressive cancer, and wanted to talk to an oncologist to find out more about our options. The orthopedic specialist referred us to an oncology specialist and we arranged to meet.

The morning that we were supposed to meet with the oncology specialist, Cheddar got around his e-collar and bit open his biopsy stitches!!! 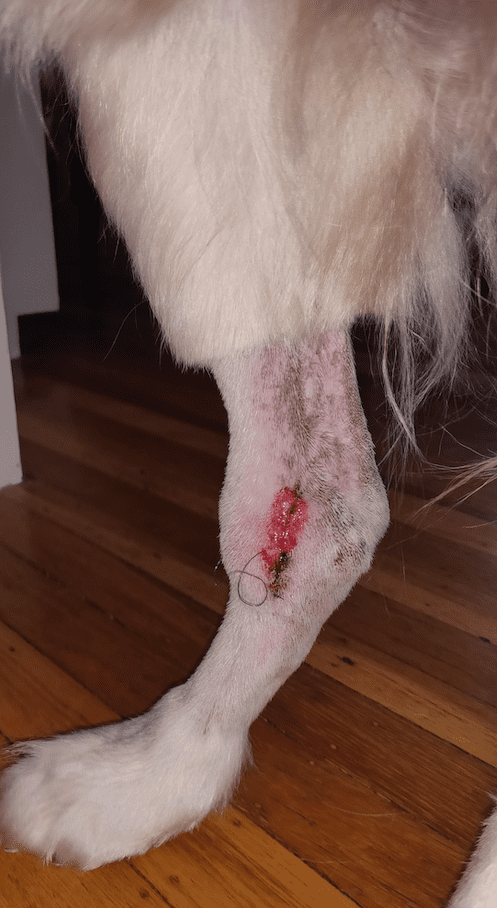 This turned out actually to perhaps be a stroke of luck — we made arrangements to stop by the orthopedic specialist’s office before we went to the oncologist. When we stopped by the orthopedic specialist, she mentioned that she would like to inspect Cheddar a little more — they had found that while running chest x-rays before his biopsy that Cheddar HATED being restrained, to the point where he was yelping as if he were in pain. The orthopedic specialist then wondered whether the spine issue that she had been concerned about before (making her hesitant to perform an amputation) was actually a non-issue, and what she had previously perceived as a yelp of pain was actually just Cheddar protesting being restrained… I will say that this aligned with our experience with Cheddar at home, where we observed that he seemed to be getting along just fine on our walks often not using his right leg at all (it would be in the air and he would bunny hop often).

In the end, the orthopedic specialist said that if the oncologist would recommend an amputation, she would be happy to perform one. In other words, if Cheddar hadn’t torn open his stitches that morning, it’s possible that amputation would never have even been an option on the table!

The meeting with the oncologist was pretty standard. She inspected Cheddar and gave us a run down of options. If we did nothing, he would probably have to be euthanized within a couple of months when the bone in his ankle became weak enough to break. We could also do radiation therapy, which would alleviate the pain, but it would likely only give him a few additional months. Or we could amputate the leg and follow up with chemotherapy, which is basically considered the gold standard for this type of canine cancer in the legs.

When we were discussing our options with each other, we came to the conclusion that neither of us wanted the traumatic experience of suddenly being with Cheddar one day and then seeing him break his leg randomly, and having to put him down that same day. The chances were that Cheddar would probably die of cancer eventually if we went down the amputation + chemo path, but at least we would know what to expect and we would see his decline rather than just waiting, not knowing when his leg would break and we would have to go to the emergency vet. The oncologist seemed to think that Cheddar could get around as a tripawd just fine, so we were comforted by that. We were also in the fortunate state of knowing that we could afford his medical procedures financially, and we wanted to do right by this dog who clearly had the will to keep going and live.

I’ll conclude this post here since it is already pretty long. I hope this detailed recall was somehow helpful for anyone going through a cancer diagnosis for their pet. If I learned anything from it, it’s to press hard for all the options, ask lots of questions, do research, and also don’t necessarily take the first answer as a given — in Cheddar’s story, at first we thought it was hip dysplasia, then perhaps an aggressive infection, then probably not osteosarcoma, then finally osteosarcoma. We were told “amputation isn’t recommended”, then “amputation would likely work well”. It was a roller coaster of a journey getting to the decision to turn Cheddar into a tripawd! Next time I’ll talk more about the amputation procedure itself and what recovery looked like for Cheddar.